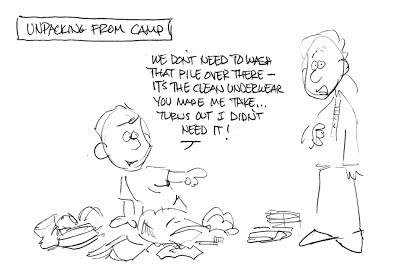 There are some amazing things that come home from camp. Many of them are quite scary...including the boys!

I had thought about doing a sketchbook entry about the special missionary broadcast yesterday, but our stake had technical difficulties. Our satellite blew before the broadcast, so they tried to rig up a laptop to run the Internet feed...which worked, sporadically. Until Pres. Packer, when it died completely. We totally missed both his and Pres. Monson's messages! Rats!

On another front, some folks from our ward just got back from EFY. The back of the student journal has an ad from the New Era, which features two cartoons: one of mine and one from Arie Van de Graaff. They were surprised to see it, as was I. At least it was a pleasant surprise! 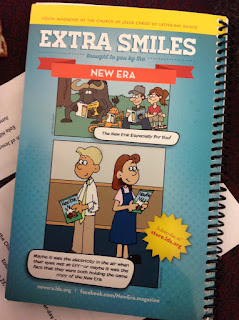 Posted by Kevin Beckstrom at 5:03 AM
Email ThisBlogThis!Share to TwitterShare to FacebookShare to Pinterest
Labels: camp, scouts, sketchbook