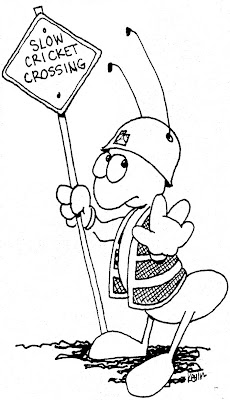 This is an illustration I did to go along with a story I did for our Utah Department of Transportation internal newsletter, The Fast Lane. Here's the story:

They were around in the early days, back before Utah was even a territory, and they nearly wiped out the first crops of the pioneers. They’re back again, only this time they’re on Interstate 15.

Thousands of Mormon crickets have swarmed I-15 in the Kanosh and Cove Fort area. Many met their doom when they tried to cross the freeway near Kanosh. The bugs were part of a swarm heading west, leaving little in their path.

Thad Stevens, District 5 materials lab, said that back in May “there were a whole bunch of bitty ones on the interstate, but they didn’t create any kind of a traffic hazard.”

Now those bitty ones have grown up and returned.

Van Burgess, deputy commissioner of the Utah Department of Agriculture said, “I’ve seen it when they were so thick on the road that they stopped traffic. It’s almost like driving on ice. They’re wet and greasy.”

“They’ll eat anything,” he said. “They just bite, chew and spit. They leave nothing behind.”

Darwin Hunt, District 5 construction engineer, said conditions on I-15 were bad, although the bugs were more annoying than anything.

“I don’t know about them making the road slick,” he said. “That may be kind of an exaggeration. It’s kind of like a chip seal.”

The pioneers’ crops were saved by flocks of seagulls that devoured the crickets. That could happen this time around as well.

“You may think I’m BS-ing you,” Hunt said, “but I’m not. There were sure a lot of seagulls around there!”

Posted by Kevin Beckstrom at 8:00 AM
Email ThisBlogThis!Share to TwitterShare to FacebookShare to Pinterest
Labels: crickets, udot