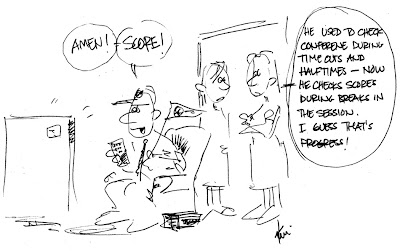 I read an article with all kinds of "gee whiz" facts about the NCAA basketball tournament. One of the items that caught my eye was that BYU is the school with the most appearances in the Big Dance without ever making it to the Final Four.

Not because of lack of skill (witness Danny Ainge, Kresmir Cosic and Jimmer Fredette, among others). Rather it's because of the potential conflict with General Conference.

You know that scripture that says you won't be tempted beyond what you're able? But then again, perhaps that's why they invented split screen.
Posted by Kevin Beckstrom at 5:03 AM
Email ThisBlogThis!Share to TwitterShare to FacebookShare to Pinterest
Labels: basketball, conference, lds, sketchbook