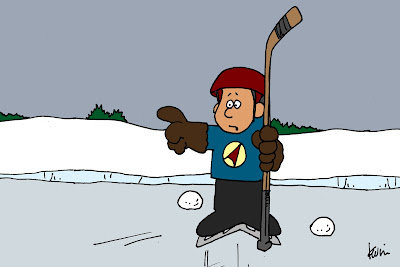 OK, I'm going to try another one. I made a nice little hockey gag based on the NHL labor dispute. Then they went and resolved it before it ran, so the cartoon was outdated.

The original caption had something to do with using NHL players in their game at the local pond. But now it needs something new, so I turn to you, dear readers, for your input. What should this cartoon's caption be? Leave a comment, send an email, or let me know some other way.

At the very least, the winner will get a mention when the new, improved cartoon runs again next Saturday. Enter early and often!
Posted by Kevin Beckstrom at 5:03 AM
Email ThisBlogThis!Share to TwitterShare to FacebookShare to Pinterest
Labels: contest, hockey, ripped from the headlines