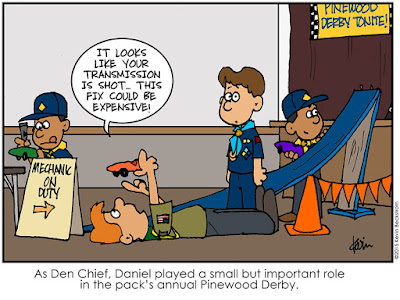 So last night was our pack's Pinewood Derby, which seemed to be a success for the most part.

Only two upset parents — the kids were all OK, although some were disappointed that their cars weren't the fastest. There were some amazing designs, including a Hershey's bar and a banana (both of which were extremely fast!). Only one car exploded. Well, not exactly exploded, but the back fell off and was beyond repair. And there was a divot in lane three that caused a few cars to fly off the track, jump the safety barrier and crash into the crowd. No injuries were reported, however. The cookies and chocolate milk seemed to make up for any bad feelings.

In other words, it was a normal Pinewood Derby...and now we're all planning our cars for next year!
Posted by Kevin Beckstrom at 5:03 AM
Email ThisBlogThis!Share to TwitterShare to FacebookShare to Pinterest
Labels: pinewood derby, scouts