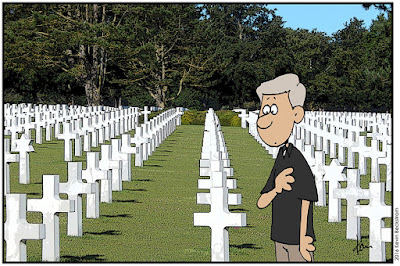 Of all the places we visited during our field trip to Europe, the most meaningful was Normandy. Visiting the American Memorial Cemetery was stirring.

One thing I didn't know was that only 40 percent of those who were killed in the battle are buried there.

There was a particularly poignant moment for me when we stopped at Omaha Beach — the beaches are beautiful — and our students waded into the water amongst the floating piers. I watched as they came back in, and I realized that our kids were about the same age as many of those who took part in the battles there.

We also stopped at another cemetery in Normandy: La Cambe — the one for the German soldiers. Many of those buried there were also still in their teens. It certainly put a whole new perspective on the war.
Posted by Kevin Beckstrom at 5:03 AM
Email ThisBlogThis!Share to TwitterShare to FacebookShare to Pinterest
Labels: cemetery, Europe, memoriam, Normandy, WWII