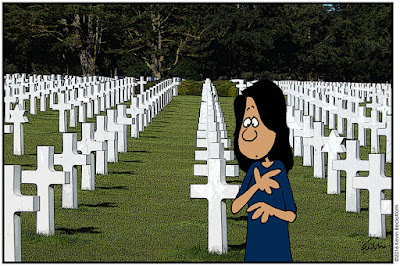 My father, brother, uncles, nephews, friends, colleagues and others have served in the military. I've appreciated their service and sacrifice. That appreciation has deepened in recent months.

This last summer we visited Normandy, including the American Memorial Cemetery and several of the D-Day sites. It gave me a deeper appreciation and greater perspective of what so many individuals went through to serve the cause of freedom.

In addition to those sites, we also visited the German Memorial Cemetery, also in Normandy. So many of those soldiers were still in their teens, cut off in their youth — a sobering reminder of the terrible price to pay the gods of war.

To us in the United States it seems that World War II was a long time ago. Yet the memories are still fresh in the history of Europe: the scars are still there in the fields of France.

I clearly remember how many people in Korea expressed their thanks to me when I told them that my father had been there as a soldier during the Korean War. Their gratitude for his sacrifice in their behalf was deep and genuine.

Thank you to all who served and who are currently serving. The good you do is appreciated.
Posted by Kevin Beckstrom at 5:03 AM
Email ThisBlogThis!Share to TwitterShare to FacebookShare to Pinterest
Labels: holiday, Veteran's Day