Keeping dad occupied and out of the way 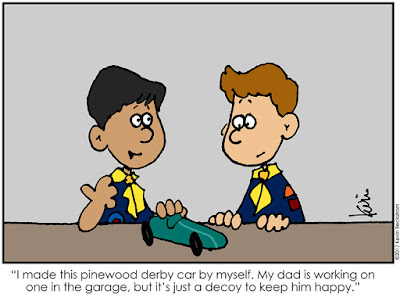 I've seen two solutions that worked well to prevent the dads from taking over the pinewood derby. In one pack they handed out cars at pack meeting, gave the kids half an hour to build the cars, and then raced them afterward. In another, the elders quorum held their own races the week after the Cubs.

This month is Scouting Month, the anniversary of the founding of the Boy Scouts of America. Thank you, Lord Baden-Powell!
Posted by Kevin Beckstrom at 5:03 AM
Email ThisBlogThis!Share to TwitterShare to FacebookShare to Pinterest
Labels: pinewood derby, scouts