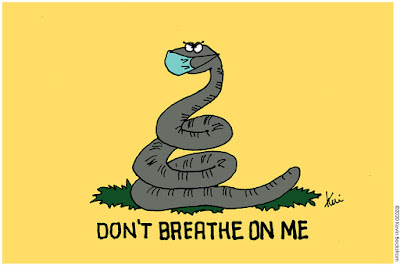 As this is the week of Independence Day in the United States, I've been thinking about symbols of the Revolutionary War.

One of the most famous is the Gadsden flag — often referred to as the "Don't Tread On Me" flag. It was a flag used by the Continental Marines, and it has its roots in a political cartoon by Benjamin Franklin.

The symbol has been co-opted by several groups over the years, and in some contexts can be considered offensive or even racist.

It's not meant to be any of that here. It's just a reminder to wear your mask.
Posted by Kevin Beckstrom at 5:03 AM
Email ThisBlogThis!Share to TwitterShare to FacebookShare to Pinterest
Labels: flag