Didn't he perform at Bilbo's party? 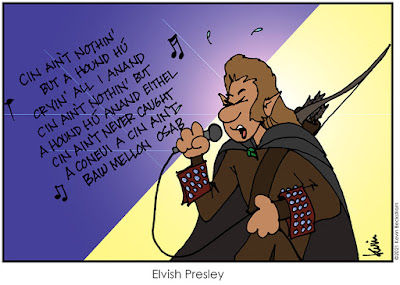 I was watching a training video the other day. There was a typo in the closed captioning — the autogenerated captions apparently didn't understand "Elvis" so they replaced it with "elvish." I dutifully listened to the rest of the video, but my focus was on the sketches in my notepad.

A quick internet search showed that the gag has been done before (mostly as a meme) but only half-heartedly: putting pointy ears on Elvis; Legolas singing Love Me Tender; or throwing in some Tolkien-ish words into some of Elvis' songs.

My thought that the gag should be like Elvis: a little over the top! Singing his songs in Elvish, wearing rhinestone-studded Woodland elf clothes! And definitely not the fat Elvis! I tried rendering the lyrics he's singing into an Elvish script, but part of the fun of the joke is almost recognizing the lyrics.*

When I report back on the training, I'm going to have to say that I may not have gotten much out of it, but I thoroughly enjoyed it!

*If you're interested, we could get into a side discussion on the theory of humor. Any takers?

Posted by Kevin Beckstrom at 5:03 AM
Email ThisBlogThis!Share to TwitterShare to FacebookShare to Pinterest
Labels: elf, Elvis, hobbitses