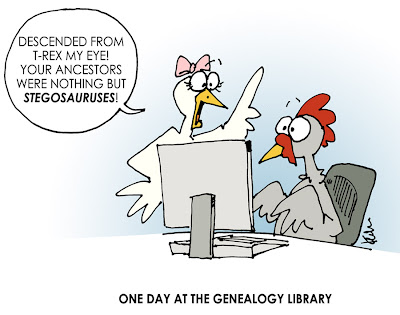 I'm pretty sure most people don't think even for a second about the research that goes on behind the scenes to create a cartoon. In this cartoon, for example, it's not hard to find those who theorize that modern birds evolved from dinosaurs. There are some raptors that have been compared to vicious chickens (which is sort of where this whole idea started!).

Well, if I were a rooster trying to impress a hot chick, I asked myself, what sort of ancestor would I claim? Well, the king of the dinosaurs (T. Rex) scores fairly high on the brain to body size ratio, which is one measure they use to determine a dinosaur's relative intelligence (the example of Rex in Toy Story notwithstanding!).

The research came in determining what would be considered the dummy of the dinosaurs. So I consulted an expert, my fifth grader.

A little too easy, I thought. So I consulted several reputable sites on the Internet to determine which dino was indeed the dumbest.

Site after site listed the stegosaurus as the major league idiot of the dinosaurs, using the same brain size-to-body size criteria that crowned the T. Rex king! Who knew? Well, besides my son, I mean...

There was one list, however, that had the great stego listed as No. 2 on the all-time idiot list. No. 1?