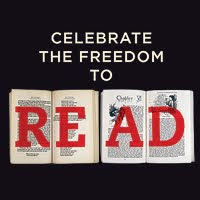 The American Library Association has a list of books that have been challenged or banned. Some I can kind of understand the argument that they should be restricted to age-appropriate audiences. But some that are on the list are just crazy! The Hobbit, works by Maurice Sendak, Faulkner and Hemingway.

J.K. Rowling was asked if she was worried how critics might receive her new book, The Causal Vacancy. She responded with something like,"I'm not too worried about what critics say. After all, I've had my books burned!"

Today's cartoon celebrates Harry Potter, the Lord of the Rings and The Hunger Games, three sets of books that have spent time on the list. 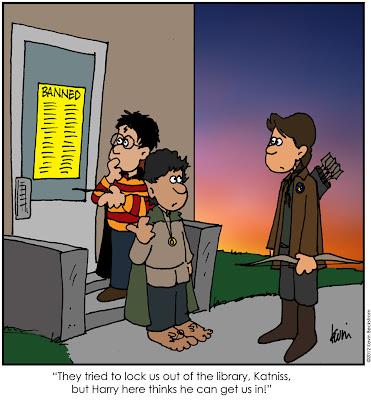 I promise I'll have General Conference stuff up here tomorrow. If you need a packet of conference activities, check out Arie Van De Graaff's stuff over on Sugardoodle.
Posted by Kevin Beckstrom at 5:03 AM
Email ThisBlogThis!Share to TwitterShare to FacebookShare to Pinterest
Labels: Banned Books, book, literature, single panel