I'll answer for you 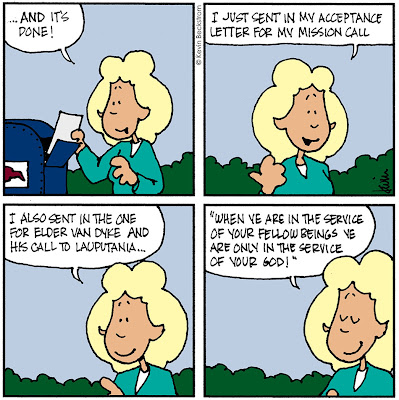 Now before you go running to the atlas or Google Maps to find Lauputania, I have to warn you that it's a fictional country in Europe that's populated with missionaries. Specifically, missionaries serving under Arie Van De Graaff (aka, the Mormon Cartoonist). I have to put a plug in for him here, because it is time for General Conference, and Bro. Arie publishes a General Conference Activity Packet at Sugar Doodle.

I also want to invite you to be sure to come back on Monday and check out the General Conference Recap edition of the Monday Sketchbook.

One more thing. Kerry Jo started a mission blog: kerryjosmission.blogspot.com. This could be interesting!
Posted by Kevin Beckstrom at 5:03 AM
Email ThisBlogThis!Share to TwitterShare to FacebookShare to Pinterest
Labels: 121, calling, lds, mission, missionary, strip