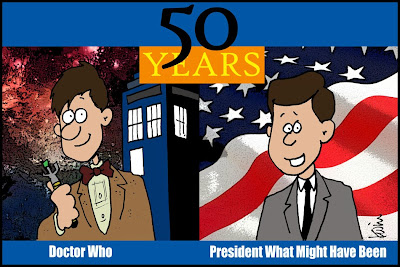 Caricature has never been my strong suit, but for today's panel I had to try as it's the 50th anniversary of both the assassination of Pres. Kennedy and the debut of Doctor Who. In fact, the premiere episode of Doctor Who ran two days after Kennedy's assassination, which didn't help its ratings very much.

I thought this might be an interesting way to pay tribute to two cultural icons, both of whom found a way to inspire hope and to promote exploration in space.

And just for proof that great minds often think alike -- and so do cartoonists -- here's a link to Arie Van De Graaff's Doctor Who gag (and a much better caricature of No. 11!).
Posted by Kevin Beckstrom at 5:03 AM
Email ThisBlogThis!Share to TwitterShare to FacebookShare to Pinterest
Labels: anniversary, Doctor Who, President, ripped from the headlines