So what are you guys, anyway? 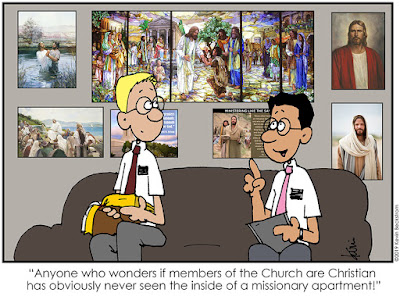 There are a couple of stories behind today's cartoon.

Our son, who is serving in southern California, was awakened the other night by the CO2 alarm. He called the mission president, who told him to call 911. The fire department came and checked their apartment and gave them the all clear. Then one of them asked if they were Christian. Our son looked around the apartment and counted no less than 77 pictures of Christ!

"I guess it was kind of obvious," he said.

The other is from our local missionaries (shout out to Elder Lindstrom and Elder Heaton!). They have a banner just like the one in this cartoon on their wall — six feet long by two feet wide. They may not have the same quantity in their apartment as our son, but they make up for it in size!
Posted by Kevin Beckstrom at 5:03 AM
Email ThisBlogThis!Share to TwitterShare to FacebookShare to Pinterest
Labels: Christian, Jesus Christ, lds, mission, missionary