That's the night the lights went out 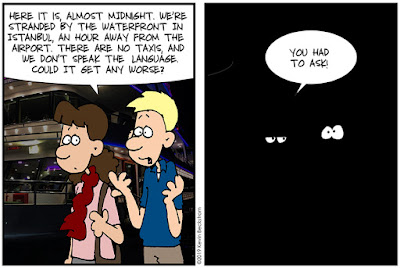 So there we were, on the waterfront in Istanbul, just before midnight. Our rendezvous point was in front of the subway station, but our taxi driver didn't show up.

I wasn't worried yet.

There were fewer and fewer taxis, and the ones that were empty were picking up the locals.

I started to worry just a little.

And then, at the stroke of midnight, all the lights went out. Closing time for the subway — and the rest of the neighborhood ! Yikes!

We were finally able to flag down an open taxi who was willing to take us to the airport — at double fare! But at that point, we were willing to pay!
Posted by Kevin Beckstrom at 5:03 AM
Email ThisBlogThis!Share to TwitterShare to FacebookShare to Pinterest
Labels: Istanbul, taxi, trip, vacation