Yesterday I was honored to receive an award from the Association for Mormon Letters. My cartoon collection, That's One Small Step for a Mom, One Giant Leap for Missionarykind. won the 2019 award in the Comics category.

Here's what they said in their write-up:


That’s One Small Step for a Mom, One Giant Leap for Missionarykind is the latest collection of cartoons from Kevin Beckstrom. As a cartoonist, Beckstrom is best known for his regular contributions to the New Era, the official youth magazine of The Church of Jesus Christ of Latter-day Saints. Yet most of his work has appeared on his personal comics blog BeckstromBuzz and his various social media platforms, where he has published a new comic or cartoon virtually every day for more than a decade. His simple, distinctive style has become instantly recognizable to Latter-day Saints throughout the world. And his charming sense of humor has made more than a few Latter-day teenagers chuckle at themselves and their fellow Saints.

That’s One Small Step delivers what it promises: smile-inducing cartoons about Mormon missionaries and the families that support them (from afar) for eighteen months to two years. It pokes fun at many of the situations that have become staples of the missionary experience: eccentric companions, unpredictable weather, hard-to-learn languages, and odd investigators. The cartoons are like the quirky snapshots in a missionary’s photo album, but they are also tributes to the young women and men who submit themselves to daily unpredictability in the cause of Jesus Christ and His message of peace. Indeed, Kevin Beckstrom’s cartoons remind us why we should value missionaries and their selfless service.

I am honored and humbled, but most of all I'm excited to see that people read my cartoons! Thank you!

Enough with the shameless self-promotion. Have a great day! 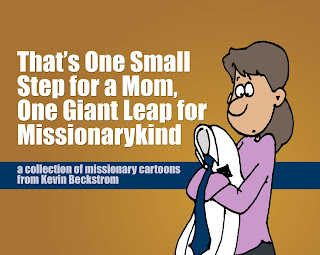 Posted by Kevin Beckstrom at 10:28 AM
Email ThisBlogThis!Share to TwitterShare to FacebookShare to Pinterest
Labels: award, book, missionary, shameless plug