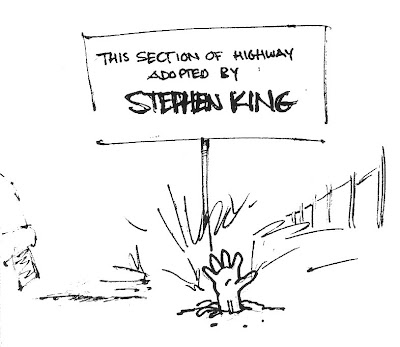 I think I drew this about the same time I read Pet Sematary.

Yesterday in church the bishop read a letter from the First Presidency reaffirming the Church's political neutrality. That called to mind an instance that happened just about four years ago. One of our Sunday school teachers apparently "forgot" this position, and passed out campaign literature to one of the youth classes. Well, another teacher (of a different political persuasion) took umbrage at that, and also passed out campaign material. We thought that rather than throw gasoline on the fire, we should take a different approach. So the next Sunday, we came to meetings wearing our Pahoran buttons (see Alma 61). I guess the folks involved got the message because there weren't any more problems after that!
Posted by Kevin Beckstrom at 8:03 AM
Email ThisBlogThis!Share to TwitterShare to FacebookShare to Pinterest
Labels: elections, sketchbook