In memory of Steve Harry 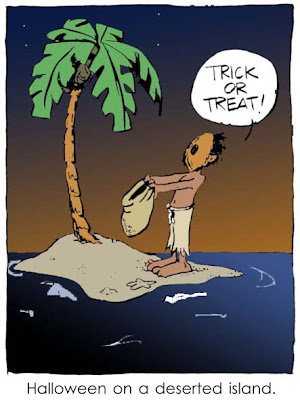 The original caption of this was "Halloween on a desert island." When it was set to go to print, the editor, Steve Harry, said that I needed to change it to "deserted island" so that it would be correct. He said that folks always got that wrong, mainly because of the Gilligan's Island theme song.

Steve passed away last week, so I thought it only fitting to run this -- with the corrected caption -- in his memory.
Posted by Kevin Beckstrom at 8:28 PM
Email ThisBlogThis!Share to TwitterShare to FacebookShare to Pinterest
Labels: halloween, single panel