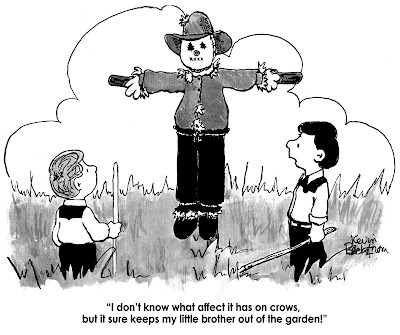 This is probably one of my first attempts ever at an ink wash cartoon. Not bad for a high schooler, although you can certainly see the Peanuts influence in the kids. Not much of a garden though, is it?

On an interesting historical note (in our family, at least), the scarecrow bears an eerily uncanny resemblance to some bad guys Ben invented when he was about four, the Hay Men. I'll have to dig one up and post it.
Posted by Kevin Beckstrom at 8:08 AM
Email ThisBlogThis!Share to TwitterShare to FacebookShare to Pinterest
Labels: single panel