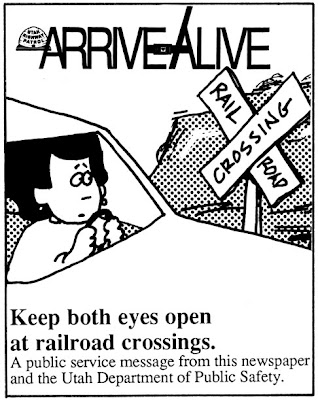 Tomorrow is the anniversary of the completion of the first transcontinental railroad in the United States. So to commemorate the event, I want to fulfill a promise I made long ago.

One day at the Utah Department of Transportation, a man wearing a hard hat came to the information desk. He had an idea that he wanted to share, and wanted us to share as well. I told him I would share it...but I didn't say where or when.

"This proposal is brought UP from Kansas City and Colorado because there are definite advantages. Nevada concurs.

"Problems historically almost resurrect the Civil Ware East of the Mississippi. Furthermore, the 40th parallel is very complex, especially in Europe and Asia.

"I have gotten acceptance of the 40th parallel as far east as the 87 37 west longitude, but Michigan and the Great Lakes problems amplify problems greatly on those reconciliations.

"Within Utah, the population versus territory (IM [out of]) balance becomes readily apparent at the suggestion of four territories divided by Super Powered Train Lines and Related Organized Utilities.

"The train would run across Utah through Ouray, Thistle, Payson and Ibapah. However, the majority of the problem seems to be to the EAST.

"The linear regression model is extremely sensitive to distance squared from the line. Whereas the majority of the Utah and Arizona universities are east of the line, it appears advantageous to DOG LEG A DOUBLE DRIFT. RECENT PRIORS MAY BE OBTAINED FROM THE KITT PEAK DATA IN Southwestern Arizona during early April of 2323 A.D.

"KANSAS =/=CANADA AND THE BARRIERS ARE STILL LEAKING BADLY.

"Expectations of the magnitude of the problem heading north are considerably out of calibration. Could not find crayons in PANIC BAG. CHINESE SECURITY STAMP 2:35 P.M.

"Although there are many advantages in a trip direct to Greece by airplane, the train calibration and tuning systems that were tested on AMTRAK in Kansas in 1988, In Canada in 1987, and in Europe both years can provide some very useful information for future planning. We really need a well-developed research prject.

"The government and the public are the same, and therefore, those objecting to reorganization are those who know they have been taking more than they give. Some lawyers and lobbyists also.

Now I've fulfilled my promise. You're welcome!
Posted by Kevin Beckstrom at 8:00 AM
Email ThisBlogThis!Share to TwitterShare to FacebookShare to Pinterest
Labels: arrive alive, PSA, udot