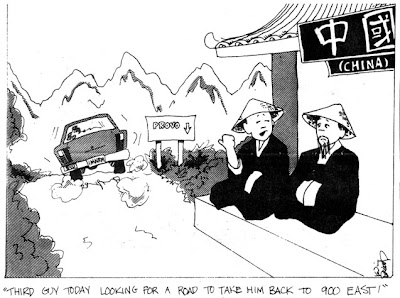 This is one of my Daily Universe editorial cartoons. When I was going to school, I thought it was pretty stupid that the city would have one of the main north/south roads to campus torn up (900 East) during the summer. Little did I know that a few years later, I'd be telling folks what a great idea it was to have the other main north/south road to campus torn up all summer (and into the fall!) with University Avenue (see the Explore Provo cartoons).

I was a little surprised that they didn't typeset the caption, "Third guy today looking for a road to take him back to 900 East."

I also thought it was pretty cool that I could show off my mad han-ja skills, using the Chinese characters for China. I was impressed!
Posted by Kevin Beckstrom at 8:01 AM
Email ThisBlogThis!Share to TwitterShare to FacebookShare to Pinterest
Labels: editorial, single panel