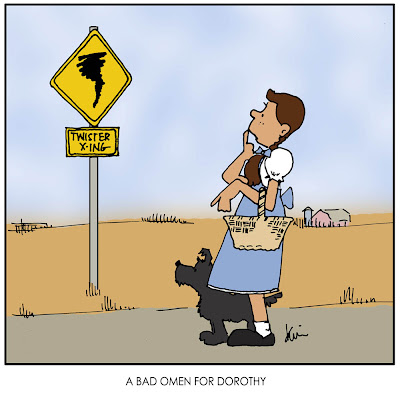 Here's one of my little claims to fame. Not this cartoon, but the cartoon reminds me of a story.
Several years ago, there was a huge wreck on I-84 in eastern Oregon due to a dust storm that blew through the area and created zero visibility conditions on the freeway. Dozens of cars and trucks crashed in the few minutes of darkness.
That part isn't my claim to fame, though.
A few years later, when I was working as the public information officer for DMV, I got a call from a mystery writer from Portland, April Henry. She was doing research for a new book, and she wanted to use the crash as a starting point. As PIO, I had access to the accident records, and walked her though the official account of what happened. As a result, she gave me credit in the acknowledgments of her book Learning to Fly. I helped her with a couple of other books as well, mostly her Claire Montrose mysteries.
I got an e-mail from her a little while back, looking for some help with a new book. So buy all of April's books and look for my name in the acknowledgements!
Posted by Kevin Beckstrom at 8:00 AM
Email ThisBlogThis!Share to TwitterShare to FacebookShare to Pinterest
Labels: single panel