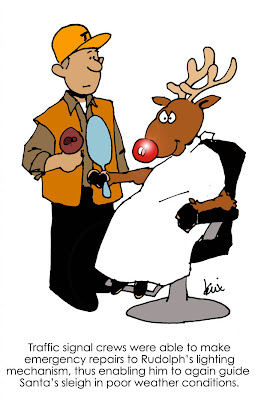 I figure I might as well get all the Rudolph 'toons out there. I almost want to apologize for having so many DOT and Rudolph-themed cartoons, but it seems like such a natural fit!

I hate to do this, but I have to throw in something for the ol' Gee-Whiz File here. Several years ago when I worked for the Utah Department of Transportation, I wrote an article for AASHTO Quaarterly about Lester Farnsworth Wire. Wire was a policeman in Salt Lake City who is credited with inventing the first electric traffic light. One version of his story says that he chose red and green for the color of the lights because he used Christmas lights to illuminate the prototype -- which was made out of an old birdhouse. So that line from the song: "even street lights blink a bright red and green" is right on the mark.

Now you know the rest of the story!
Posted by Kevin Beckstrom at 8:01 AM
Email ThisBlogThis!Share to TwitterShare to FacebookShare to Pinterest
Labels: AASHTO, holiday, single panel, transportation, udot