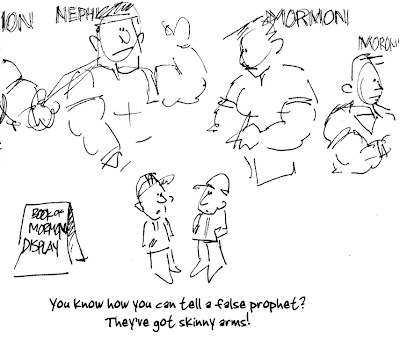 This last week marked the passing of famed artist and illustrator Arnold Friberg, probably best known for his paintings based on the Book of Mormon. Mr. Friberg depicted the people in the Book of Mormon as very strong and muscular, particularly the prophets.

In some copies of the Book of Mormon, his paintings were interspersed with the text. They often became a milestone for measuring how far one had read: "I'm almost to the Abinadi picture" or "I just passed Samuel the Lamanite." Recent editions no longer include his artwork, but his work is well known amongst Sunday school students the world over.

Posted by Kevin Beckstrom at 5:03 AM
Email ThisBlogThis!Share to TwitterShare to FacebookShare to Pinterest
Labels: lds, sketchbook