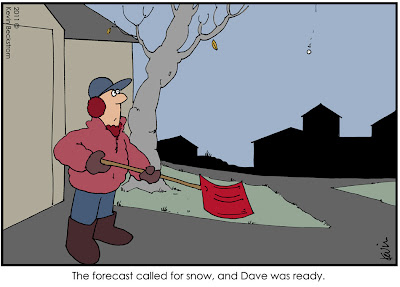 I don't know why I have all these snow cartoons. Here in the Willamette Valley we hardly ever get snow. But when it does snow, it's a huge event. TV stations in Portland come up with slogans like "Stormaggedon" if there's even a slight chance of the white stuff coming down.

Just last week, there was a forecast of snow, and the media had reporters all over the city just waiting for the first flakes to fall. "Nothing here yet, but we're keeping an eye on things so you'll be the first to know."

When a truck crashed on I-84, the on-scene reporter was positively giddy because something happened -- there was something to report!

Drivers freak out, too. People who are accustomed to driving in all sorts of wet weather suddenly find themselves sliding off the road if there's a mention of snow. I've seen chains spewing up sparks on bare pavement "just in case."

In Utah, I never remember having a snow day. I remember my boss being upset because I was late to work in a heavy snowstorm.
Posted by Kevin Beckstrom at 5:03 AM
Email ThisBlogThis!Share to TwitterShare to FacebookShare to Pinterest
Labels: single panel, snow