Dying to get in?

In the spirit of the rewinds I did over the last week, this is a retooling of an old one that was originally done in black and white. 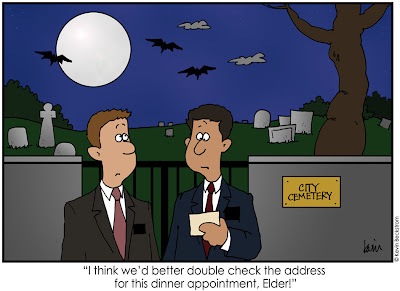 I have to admit that as a missionary I had a few dinner appointments that were scary, some that I hoped were the wrong address. But they turned out well for the most part (except for that one with Elder Sellers in Yeosu).

I just hope we're not one of those scary addresses for the missionaries in our area!
Posted by Kevin Beckstrom at 5:03 AM
Email ThisBlogThis!Share to TwitterShare to FacebookShare to Pinterest
Labels: halloween, missionary, mormonisms, single panel