Monday Sketchbook: Get set to spring 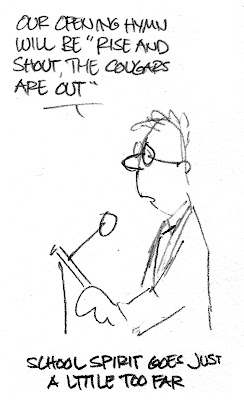 We had ward conference Saturday at Reser Stadium in Corvallis.

I guess it wasn't actually ward conference. But a good chunk of our ward was there at the BYU vs. Oregon State football game. The oddsmakers had the Beavers as a 1 1/2 point favorite, and with the roller coaster way both teams have been playing this season, it could have gone either way. There were many of the Cougar faithful who brought along Beaver gear to switch in to, just in case.

Through the third quarter it was a close game, but then BYU put things away. When OSU scored its final touchdown, there were probably more blue shirts in the stadium than orange.

There was a lot of post-game excitement in church today. During Sunday school lot of folks quoted bits and pieces of the Football Fireside that was held in our neighboring stake. So it wouldn't have surprised me much if someone had really suggested this as our opening hymn.

Go, Cougs!
Posted by Kevin Beckstrom at 5:03 AM
Email ThisBlogThis!Share to TwitterShare to FacebookShare to Pinterest
Labels: BYU, fireside, football, ripped from the headlines, sketchbook