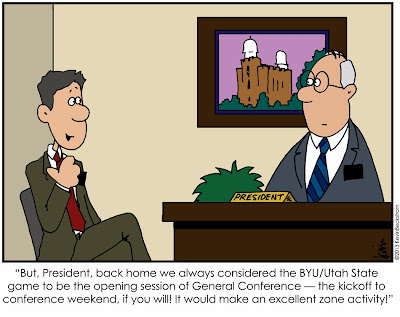 When I was a green missionary, one of our district leaders had the realization that Super Sunday in the states actually translated into Super Monday in Korea -- our P-Day. He arranged for a "district meeting" at a local establishment that just happened to be carrying the Super Bowl on TV.

It seemed a little fishy to me, but I was green and didn't know any better. The zone leaders showed up in the second half, so that made me feel better.

I still feel guilty about it. I'm sure a lot of that guilt would have been assuaged if it had been a BYU bowl game instead!
Posted by Kevin Beckstrom at 5:03 AM
Email ThisBlogThis!Share to TwitterShare to FacebookShare to Pinterest
Labels: BYU, football, mission, missionary, President