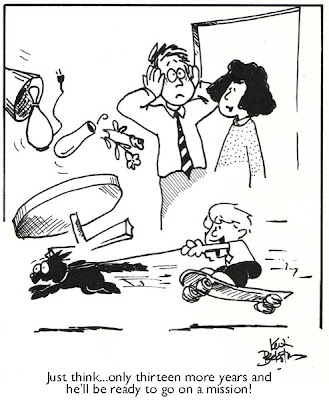 This was drawn when three of the boys were hovering around the age of six, plus or minus two years.

At the orientation in the MTC yesterday when we took Zach in, the mission president said - jokingly - that at one time they considered making 16-year-olds eligible to serve missions because at that age, "they know everything and their parents wouldn't mind seeing them leave." At least half of that may be true!

It was great to see Elder Zach walk through those back doors with courage and faith. He'll do an awesome job!
Posted by Kevin Beckstrom at 7:52 AM
Email ThisBlogThis!Share to TwitterShare to FacebookShare to Pinterest
Labels: lds, missionary, single panel, zach