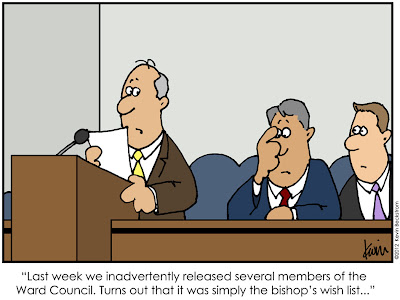 I attended one ward that had its boundaries change, so there was a lot of reorganization that was going on. It seemed like they called and released members of several presidencies within the ward. They also announced that in the prior week they accidentally released some people who should not have been released, so they corrected those and reminded those folks that they still needed to perform their responsibilities.

That got me to wondering how they could have gotten to the point where they released those people, and why nobody said anything when it was being done. It was all very confusing, and I hope that by now it's all sorted out.

Anyway, here's one possible explanation of how that bit of ward business could have slipped in.
Posted by Kevin Beckstrom at 5:03 AM
Email ThisBlogThis!Share to TwitterShare to FacebookShare to Pinterest
Labels: business, calling, lds, single panel, sustain