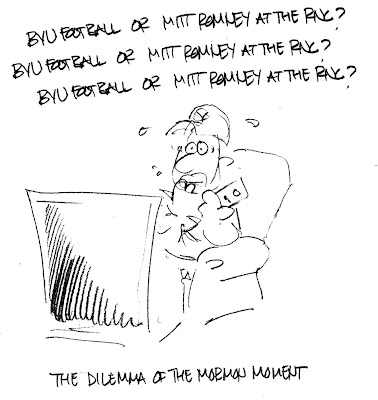 So last Thursday, BYU kicked off for its season-opening football game at the exact same time that Mitt Romney addressed the Republican National Convention. For many folks I know, that caused a real dilemma. Would it be wrong to watch one in favor of the other?

For me, it wasn't much of a problem. I figured I'd watch the game, then if I wanted to hear the speech, I could catch it on some site on the Internet or read about it in the newspaper.

As it turned out, the game broadcast I listened to carried a simultaneous feed of the convention speech (someone at the station must've left a switch open). It got a little confusing at times as the crowds at one event cheered at times that were kind of awkward for the other!
Posted by Kevin Beckstrom at 5:03 AM
Email ThisBlogThis!Share to TwitterShare to FacebookShare to Pinterest
Labels: football, politics, sketchbook, tv