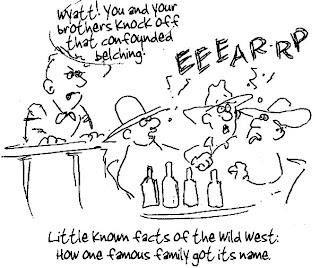 I showed this to my son, and he had no idea who Wyatt Earp was. The “Gunfight at the OK Corral” also drew a blank. He must’ve also missed the Star Trek episode “Spectre of the Gun.”

Anyway, Wyatt Earp is best known for his participation in the Gunfight at the OK Corral, along with two of his brothers, Virgil and Morgan, and Doc Holliday.

And here’s a little something for the Gee-Whiz File. According to genealogy.com, although Wyatt Earp had three wives, he had no offspring. Probably due to his lack of manners, I’m guessing.
Posted by Kevin Beckstrom at 7:29 PM
Email ThisBlogThis!Share to TwitterShare to FacebookShare to Pinterest
Labels: single panel, sketchbook